New Zealand booked their spot in the semi-finals against their local rivals Australia with an uninspired but controlled game against a fired up Pumas outfit in Auckland. The final score of 33-10 flattered the All Blacks, though one always felt they would run away with the game in the last twenty minutes and so they did, moving from 18-10 to 33-10.

Argentina kicked-off the match and right from the off showed they had not come to make up the numbers. 10mins gone and they had been pressing so 10 Fernandez went for a drop goal but missed. New Zealand came straight back and Piri Weepu converted a penalty from in front of the posts, 3-0. Play ebbed and flowed and from a sweeping slick hands move we all thought that Keiran Reid had dotted down in the corner on 18 minutes, but his left foot shaded the line, no score. The All Blacks were playing the game in the right half and so on 24 mins Piri Weepu slotted his second kick for a collapsed scrum. Felipe Contepomi had a chance to close the gap on 26 minutes but missed his penalty. Then on 30 minutes some bizarre handling set the Pumas backs free and Julio Farias Cabello went over with Contepomi adding the extras 6-7.

33 minutes and James Cruden came on for Slade and almost straight away Argentina gave Weepu another pot at goal for a high tackle on Cruden. This was converted and the All Blacks were back in front 9-7. The penalty count against the Pumas was mounting and so it was that Weepu had another pop at goal on 38 minutes following hands in the ruck, he converted to take the score to 12-7. Shortly thereafter the half-time whistle blew.

The Pumas continued to make it hard for the All Blacks and closed the gap with a Marcelo Bosch penalty when the Blacks were penalised on 45 minutes for crossing. 12-10. 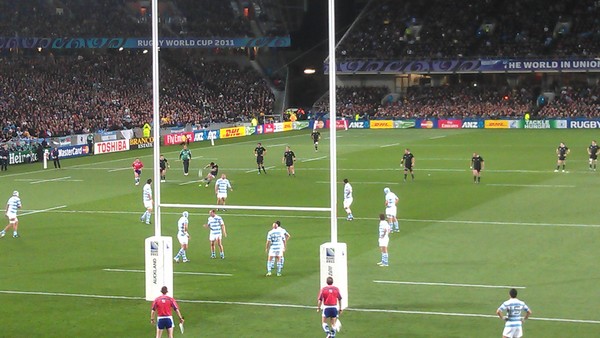 Right back came the All Blacks and on 48 minutes Weepu slotted a kick as they failed to roll away following the tackle, 15-10. The All Blacks mounted sustained pressure on the Pumas line and on 57 minutes the Puma’s Nine Nicolas Vergallo was carded for hands in the ruck. Weepu slotted the points 18-10. By now the Pumas had a high tackle count and the game was breaking up so it was that on 68 minutes Reid was able to score, Weepu missed the conversion from out wide 23-10, 72 minutes and Weepu’s final act was a further penalty 26-10.

Then with the clock running down Brad Thorn who had a towering game was rewarded with a try which Cruden converted to give us the flattering score of: New Zealand 33-10 Argentina