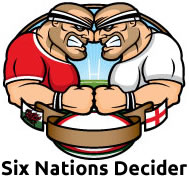 After an intriguing Six Nations which threw up plenty of surprises the title will be decided in the final round, with the entire competition resting on the result of the clash between Wales and England at Millennium Stadium.

An English side brimming with confidence following their demolition of the world champions late last year has been the pace-setter throughout the competition, but a rejuvenated Wales side, who have finally managed to recapture the form which helped them to the title last year, is finishing fast.

To get the inside word on what might happen in Cardiff this weekend we’ve enlisted the help of Barry at Total Flanker to give us an English perspective, and the lads at TheCoalFace to respond for the Welsh.