The All Blacks’ hopes of creating a new world record for consecutive test victories evaporated on the back of a poor performance against an injury-ravaged Wallabies outfit on the weekend, the 18-all draw perhaps flattering the reigning world champions.
Celebrating hooker Keven Mealamu’s 100th test-cap, the All Blacks were hot favourites heading in to the Brisbane encounter, where they sported their new look jerseys, complete with sponsor AIG’s logo emblazoned across the front. But someone forgot to tell the Aussies that they were meant to roll over and submit, and the home-side played with passion and pride for the full 80 minutes.
While common-place in Northern Hemisphere clashes, games in the bottom half of the world rarely end try-less, but such was the case on Saturday night, with all points coming from the boot via penalty kicks.
It was a bumbling performance from the All Blacks, who also let themselves down on the discipline-front, having prop Tony Woodcock sin binned just before halftime.
There was drama in the dying moments, when, with the scores locked at 18-all both sides had the opportunity to win the game, the Wallabies first trying to milk a kickable penalty, before the All Blacks tried to snatch their 17th consecutive victory with a dropped-goal from Dan Carter. 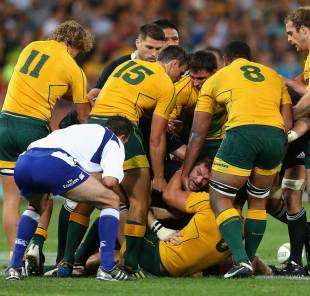 The match was marred by a cowardly act from Australian forward  Scott Higginbotham, who first kneed, then head-butted New Zealand captain Richie McCaw, putting his position on the Wallabies’ Northern Hemisphere tour in doubt.
While the draw was treated like a loss by the All Blacks, the Wallabies will take great heart from the result, with their under-strength, inexperienced side showing great heart given the torrid season they have endured to date.