The Lions produced arguably their best performance of the tour to date as they continued their unbeaten run with a 5 try rout of the Sharks. They will however need to work with the referees to sort out the number of penalties being given away at the breakdown. 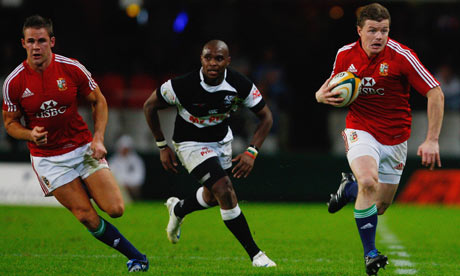 The Lions played into a swirling wind in the first half an although they had the bulk of possesion and terretory they could only go in at half time leading 3-7, thanks to a try by Lee mear converted by Ronan O’gara on 22 minutes. Sharks point came from the boot of Rory kickott on 29 minutes from a penalty. The Lions did come close to scoring another before half time as on 32 minutes Shane Williams was adjudged to have knocked on in goal so half time 3-7.

The second half and almost from the off the Lions extended their lead when Mike Phillips who was industries all game spotted a gap and had the pace to outflank the defence and dot down out wide 41 minutes and 3-12. The Sharks had a chance to close the gap on 44 minutes but the penalty went wide and it was the Lions who stretched the lead with penalties from O’Gara on 48 and 53 minutes 3-18. By now the Lions pretty much had control of the game and on 60 minutes Luke Fitzgerald put the game beyond the Sharks with a score out wide, O’Gara kicking the difficult conversion 3-25. The Lions made the first of their changes shortly after as O’Connell was replaced by Shaw and Roberts by Flutey, O’Driscoll taking over as skipper. The Lions moved further away from the home side as Lee Byrne our man of the match got a deserved score again out wide but O’Gara made no mistake with the conversion and the score went to 3-32. 10 minutes to go and another couple of changes as Vickery and Blair entered the fray. If you thought the game would fizzle out Vickery had other ideas as on 76 minutes he made another of his foolish shoulder charges on a player on the wrong side and was sinbinned. The Sharks took the opportunity to pressuer the Lions line but the Lions broke out and Shane Williams kicked ahead only to be tripped by No.8 Keegan Daniel who was perhaps lucky to just get a yellow card. At this point O’Gara was off and Hook on and Jamie Heaslip went over minutes after on full time, under the posts leaving James Hook the easiest of first kicks to produce the final score of: