Bath Rugby have a new look for 2011/12. Although the home shirt is still very similar to the past. With new sponsors it looks quite new. The alternate shirt is a refreshing change and quite striking. 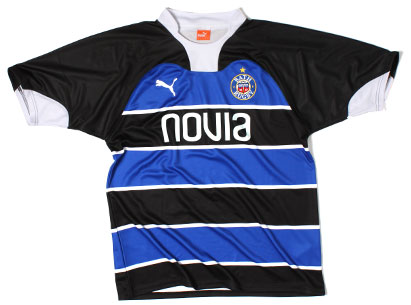 The new Bath Rugby Home shirt keeps the traditional colours of blue, black and white. The shirts are manufactured by Puma and their logo is on the right chest, whilst new main club sponsor Novia is on the torso and the club motif on the left chest. The alternate or away shirt carries the same logos but is now white with a multitude of blue flames licking up from the bottom. We expect them to be popular so get your order in now, just follow this link to the Bath Rugby Shirts page.

Bath finished their league campaign last season in 5th place, this meant they just missed out on a semi-final spot but qualified for the Heineken Cup 2011/12. This year they will have an interesting start to the campaign as they are without a few stars at the Rugby World Cup, but also have bought some good replacements. We see them competing throughout and finishing in 2nd spot but losing out in the final. The Heineken Cup sees them in Pool ‘3’ this year along with Glasgow Warriors, Leinster and Montpellier, a tough ask for more than a second place in the pool and probable entry into the final stages of the Amlin Cup.