Bill Beaumont one of the greats of English rugby at the end of the amateur era, has put his name in the frame to be the next Rugby Football Union chairman.

He said (quote)) I will allow my name to go forward, if people within the union feel that I could do a good job, then I think so as well. I don’t know if being a former top player qualifies you to be good at administration. But I’d like to think that I’ve got something to offer. (end quote)

William Blackledge Beaumont, was born in Chorley, Laqnchashire on the 9 March 1952. He played all is club rugby for Fylde as a Lock (2nd row). He was capped 34 times for England, 21 of them as captain, leading his country to the Grand Slam in 1980. he travelled with the Lions on 7 occasions, being called up as replacement in New Zealand in 1977 before being selected to captain the tour party to South Africa in 1980. He managed the 2005 Lions tour to New Zealand. He is also a senior figure in the IRB and well respected. He has been honoured for his work with both the OBE and CBE and at 59 would be an excellent choice.

Beaumont also said (quote) It’s exciting times, certainly after the World Cup, I think the squad needed to break up. A lot of experienced players have served England extremely well in the past, but you’ve got to look to the future. These are exciting times to move forward. We’ve got a build-up to a World Cup in 2015, which will be absolutely outstanding, but there are a lot of important decisions to be made before that happens. (end quote) 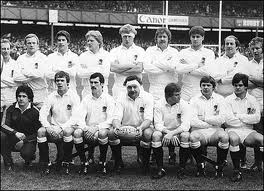