With all three of the Super XV conferences in action this week much attention will be focused on the huge clash between the Bulls and the Stormers, two of the teams tipped to compete for the title at the business end of the season, and sides which boast superstars right across the pitch.

To get the inside word from those in the know we’ve sought the opinions of lifelong Bulls man Thinus Pienaar from Kaiwhana Rugby and staunch Stormers fan Brad Smith. 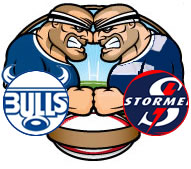 How important could this early clash prove to be in the South African conference?

It goes without saying that winning home games is crucial, and the Bulls need to win this match to build confidence after a shaky end to last season.The Stormers on the otherhand are coming back to the pitch with the coveted Currie Cup in the cabinet at Newlands,and a far better track record in last year’s competition, and go in to this game as favourites with most pundits.

It’s North versus South. It’s Forwards versus Backs. But it is not David versus Goliath. This is very much Goliath versus…well, Goliath. Recent history favours the Stormers, but we all know that history is just that – It comes down to Friday, and how the teams perform on the day.

What strengths do your side bring to the game?

The Bulls have opted for experience, with more than 1000 Super Rugby caps between them, which will be a massive factor for the team when they take the field on Friday.Hopefully traditional match-winners Morne Steyn and Pierre Spies can deliver performances of old and respectively dominate the back and forward aspects of the game.

The Stormers will continue their recent approach of making the opposition pay for any mistakes they make, whilst keeping their defensive line tight. It will be an encounter where both sides have limited opportunities, and I believe the Stormers are better placed to capitalise on those opportunities when they do arise.

What weaknesses do the opposition have which your side will look to exploit?

The Bulls will most definitely target the untested combination in the halves, where Elton Jantjies will make his debut in the flyhalf position with an equally “green” Nic Groom at scrumhalf. Then there is also the debut of Jaco Tuate at fullback, who Morne Steyn will be sure to test early on.

With the Stormers’ ability to suffocate sides with their impenetrable defence the onus will go on the home side to create their own opportunities, and unless Morne Steyn has had a drastic revival of form they may well struggle in that department. The Bulls finished last year on a low, with Morne Steyn failing to spark any kind of attack when his side were knocked out of the tournament by the Crusaders in Christchurch.

Who will be your side’s key player (s)?

I believe that the experience of Pierre Spies and playmaker and veteran centre Wynand Olivier (103 caps) will be the two key individuals upon which the Bulls will build their game, along with the prolific fetching abilities of Deon Stegmann (60 caps).The hot-wire Arno Botha could be a key replacement off the bench at the right time, and of course there is always our WMD, Morne Steyn, who on his day can decimate any team through his deadly kicking game.

Elton Jantjies – Although on debut Jantjies will be well aware of the responsibility on his shoulders. Not only will he be responsible for the goal kicking, but Jantjies will also be taking the mantle of play maker. Jantjies has an uncanny ability to break the line, and to this end scored 5 tries in 2012. However, what he makes up for in attacking ability, he lacks in defensive capability, and it will be his kicking performance, and the balance between attack and defence that will decide his team’s fate.

How will the game unfold?

While the Stormers achieved a rare double over the Bulls in 2012 both teams have changed their squads, suffered injuries to key players and made positional and tactical changes ahead of this year’s campaign. This match will as always be a closely contested affair and the side that has the most discipline will be victorious! The boots of Jantjies and Steyn will ultimately be the deciding factor and I predict the Bulls will emerge victorious, winning by 5

An away game at Loftus is a tough proposition for any team. However, as happened in 2012 I foresee a very tight affair with the Stormers defence keeping the Bulls at bay. Goal kicking will decide the game, and I envisage Elton Jantjies outshining his counterpart in that department. Stormers 22-18.