England and Leeds Rhinos back Lee Smith will switch codes at the end of the Super League season after signing for rugby union side Wasps. 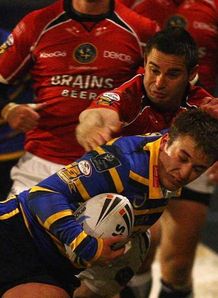 The 22-year-old, who will remain with Leeds until the end of the season, has agreed a contract that will keep him at Adams Park until 2012.

Smith has scored 42 tries in 88 games since making his Leeds debut in 2005 and was man of the match in the Rhinos’ 2008 Grand Final victory. Smith, who is comfortable at full-back, wing or centre, won the Harry Sunderland Trophy in last year’s Grand Final for his man of the match display in Leeds’ victory over St Helens and went on to play for England at the World Cup. 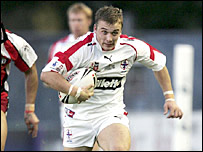 Smith said: (quote)It’s a massive challenge, not only as a league player moving to union, but also moving to London. Wasps are one of the biggest clubs in the Guinness Premiership and have some of the best players in England. The opportunity to train alongside players of such calibre with a coaching team of (director of rugby) Tony Hanks and (head coach) Shaun Edwards couldn’t be missed. I have enjoyed some great success at Leeds Rhinos and Wasps were the obvious choice with their history of success in the Premiership and Europe. (end quote)

Tony Hanks said: (quote) Lee is a quality player who will again add strength to our squad for the upcoming season. While still only 22, he has developed an impressive CV already with Leeds and England in rugby league and we are excited about the skill set and experience he will bring with him. Working alongside someone like Shaun, who has worked in both codes, will of course be a massive benefit to Lee and we look forward to welcoming him to the club in November. (end quote)